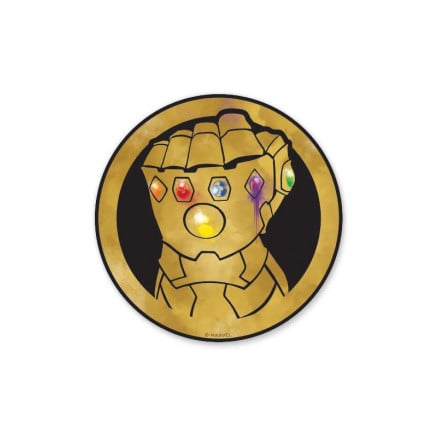 I Am Inevitable - Marvel Official Sticker He is inevitable. He is The Mad Titan. He is Thanos.
A native of the planet known as Titan, Thanos is one of the most powerful villains of the Marvel Universe.

After the destruction of his planet due to limited resources and overpopulation, Thanos sets out on a journey to bring order to the universe with his radical plans by hook or crook.

People call him a Madman because his path is brutal! His answer to overpopulation is creating a plague to vanish off half of mankind in the universe.

For years he travelled through the universe and built himself the most deadly army one could ever imagine just so he could complete his objective. The objective of bringing balance to the universe.

Thanos possesses superhuman strength, persistence and deep intellect. Even the mention of his mention causes a shiver down the spine of the people who have encountered him.

Thanos without a doubt is one of the most powerful villains and coupled with the infinity stone, one doesn’t have to imagine the massacre.

Hungry for power, narcissistic and manipulative, Thanos truly is inevitable.

Sit comfortably in your Thanos merch and watch his story unfold over the course of numerous films and comics. These Thanos tees and merch might not bring order to the universe but will definitely bring a perfect balance of comfort and style to your wardrobe.

So, what are you waiting for? Grab these amazing Thanos Merchandise right away and before it runs out of stock in a snap!