Rumoured to be the final episode, ‘The Final Problem’ was released on Sunday and Sherlock fans are in a tumult for a lot of reasons. Despite receiving a lot of negative comments from critics, there are still a lot of people (like us) who absolutely loved it. An emotional and thrilling ride the all the way, it was one of the best Sherlock episodes ever! Consisting of shocking revelations and nail-biting suspense, astounding as well as emotionally distressing (to some of us), what’s not to love about it?! Here are the top moments from the brilliantly written ‘The Final Problem’.

Moriarty is back! (Sort of)

While the series was much awaited, fans were especially looking forward to Jim Moriarty and what plans he had in store for Sherlock. Season 3 ended spectacularly with Moriarty’s message, ‘Miss me?’ going viral on all of England’s TV Screens. Just when we thought Moriarty was gone…

Season 4 hinted at Moriarty’s plans and presence all through with Sherlock receiving ‘Miss me?’ notes in his cases, however, Moriarty was never actually revealed until his fabulous entry in the 3rd episode! Although his short appearance was only a flashback, Moriarty’s presence was definitely a highlight of the episode. Presented as a ‘gift’ to Eurus Holmes, 5 minutes of unsupervised time was all Moriarty took to plan Sherlock’s ‘Reichenbach Fall’ and to tarnish Sherlock’s reputation. Moriarty was, however, mostly a sidekick in this episode. A puppet of Eurus Holmes. It is difficult to believe that the world’s most notorious criminal actually shot a few videos for a psychopath instead of planning something evil but meh! Andrew Scott absolutely killed his screen-time and we would’ve loved to see some more of his dancing, wouldn’t we?

Eurus Holmes is the 3rd Holmes sibling and a dangerous prisoner! Though this fact was revealed in the end of the 2nd episode, we get more insight into Eurus in the 3rd episode. She is described as “an era-defining genius” and more intelligent than Isaac Newton by Mycroft, who rarely calls anyone clever than himself. It’s also no surprise to the fans that she is of unsound mind and a psychopath. At the age of 5, she kills Sherlock’s best friend out of sheer jealousy and when Mycroft sees that her next target is Sherlock, he takes it upon himself to get her away from Sherlock as far as possible. Thus, Eurus is put in a solitary confinement at ‘Sherrinford’ so as to not be a threat to anyone else. It’s not a surprise to know that her psychopathic tendencies have heightened in the prison.

After confirming that he indeed has a sister by tricking Mycroft with that horrifying set up, Sherlock asks Mycroft for the whole truth. Sitting in the client chair, Mycroft tells Sherlock the complete and pure truth though unsure of John’s presence saying “It’s a private matter!”  Sherlock is still insistent of John’s presence, and when Mycroft exasperates that “This is family”, we see Sherlock raising his voice at Mycroft for the first time contending “That’s why he stays!”  It’s rather sweet and touching to see how close Sherlock is with John, and how important John is for him, so much so that they don’t have any secrets between them, not even familial secrets. We are sure this scene melted hearts of many of the viewers.

Mycroft sacrificing himself so as to not make Sherlock choose

Though seeming cold-hearted when he asks Sherlock to kill John, viewers easily understand Mycroft’s plan! He was taunting and jeering Sherlock and his intellect, accusing Sherlock of being emotional so as to make it easy for Sherlock to kill him. It’s heartbreaking to see how immediately Mycroft was sacrificing his life so as to not just save his little brother’s life, but also the life of John Watson, without whom he knows Sherlock cannot survive.

Sherlock asked to choose between Family and Friends

In one of her cruel tasks, Eurus asks Sherlock to kill any one so as to go further in her game in saving the girl and the crashing plane. Either his dear and beloved brother Mycroft, whom Sherlock looks up to for advice constantly as well as for family support, or John Watson, Sherlock’s best friend and partner-in-crime with whom he has shared a number of adventures as well as life altering moments. Of course Sherlock would rather kill himself than his ‘Brother dear’ or his best friend John Watson and though we somehow saw it coming, fans couldn’t really help but gasp when Sherlock turned the gun towards himself!

Redbeard is actually a boy!! Redbeard isn’t actually Sherlock’s dear pet dog, but his childhood best friend ‘Victor Trevor’. The pair would play pirates for hours together on end while Eurus watched with jealousy brewing inside her and Mycroft brooded over them. Eurus was so threatened by the pair’s friendship that she threw Victor down a well where he eventually drowned because Sherlock couldn’t solve Eurus’s puzzle and play with her. In his terror, Sherlock’s memory is altered and Victor becomes Redbeard the Dog, who consistently appears in Sherlock’s nightmares. Suddenly Redbeard’s already tragic death becomes even sadder. *sob* During the Season promos and at the start of Season 4, it was believed that Sherrinford must be the 3rd Holmes sibling. A 3rd sibling is hinted at the end of Season 3 when Mycroft says “You know what happened to the other one.” And when “Call Sherrinford 2 pm” was seen written in Mycroft’s planner in episode 2, it further planted the idea into the fan’s mind. It then came as a shocking surprise for the fans when they found out that Sherrinford is in fact a prison for the ‘uncontainable’ in the middle of the sea. It makes one think of Azkaban or the cave where Dumbledore went with Harry. Here Is Everything You Need To Know About ‘Doctor Strange’ 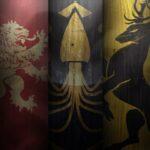 Game of Thrones Merchandise is here!